This picture is of Hezekiah’s Wall—actually known as the Broad Wall. 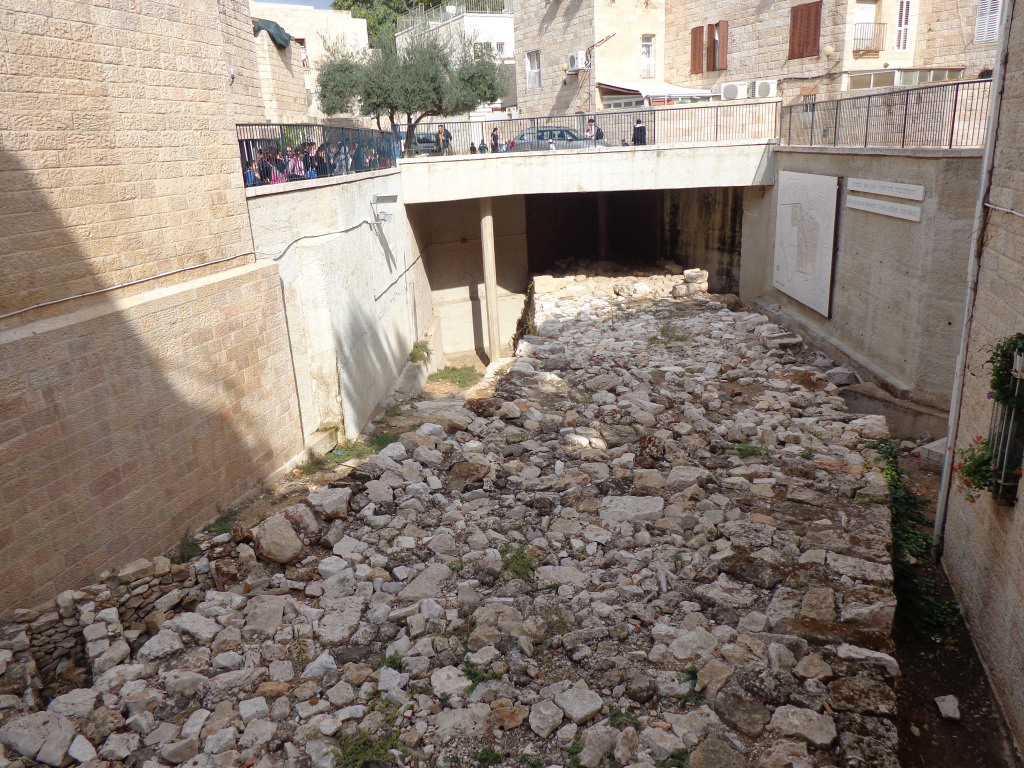 This section has recently been excavated in the Old City of Jerusalem. It is tough finding sections in Jerusalem that actually go back to Jesus’ day and before because the city has been leveled dozens of times over the centuries, including AD 70 when, as Jesus predicted, the temple would be destroyed. So it’s very cool when an actual section from the Old or New Testament is in plain view.

The really cool thing about this wall is the story behind it. Hezekiah was one of only 8 good kings in Judah. He lived 2600 years ago. We read in 2 Chronicles 32 and Isaiah 37 how the king of Assyria had invaded Judah and planned to attack Jerusalem.  In his arrogance, King Sennacherib sent messengers to taunt the Israelites, boasting about his exploits and telling the people of Judah their God can’t deliver them.

So we read that Hezekiah repaired the walls around Jerusalem and also built another wall. In addition, Isaiah tells us that he took the taunting letter sent to him by Sennacherib and “spread it out before the Lord.” What a powerful picture of humility and dependence. Because of that prayer and humility, God chose to deliver Jerusalem in dramatic fashion. That evening, God sent His angel of death to their camp and 185,000 of them were killed. Sennacherib fled to Nineveh. One day while he was worshipping his god, Sennacherib was assassinated.

Hezekiah’s wall—a reminder that in the midst of our battles, we are certainly to do what we can, (ie strengthening the walls)  but ultimately we are to spread it out before the Lord, asking Him to intervene.

One of the highlights of the past two days was hearing two cool stories of the power of the gospel. One was from a man here in Israel, who had been a Muslim. Some of his family members were actually involved in some terrorist activities against Israelis. A few months ago, this man began exploring other perspectives on the Palestinian/ Israeli conflict. In the process, he heard about Jesus and gave his life to Him. He is now living for a different master.

The other story was told to me today over lunch in the old city—pizza and iced coffee—LOVE their iced coffee…but I digress. Jason Elam began sharing a really cool story of how a few years ago God moved in the heart of one of the Bronco players who was a self proclaimed atheist—someone who for years had demonstrated absolutely no spiritual interest. In the midst of a personal crisis, this player went to Jason to seek counsel. Jason gave him a book by Andy Stanley, and suddenly the gospel light bulb went on. This guy’s life dramatically changed. His wife soon became a Christian as well.  He is now pursuing pastoral ministry.

It doesn’t matter where in the world we happen to be—the gospel is still true and is still changing lives.