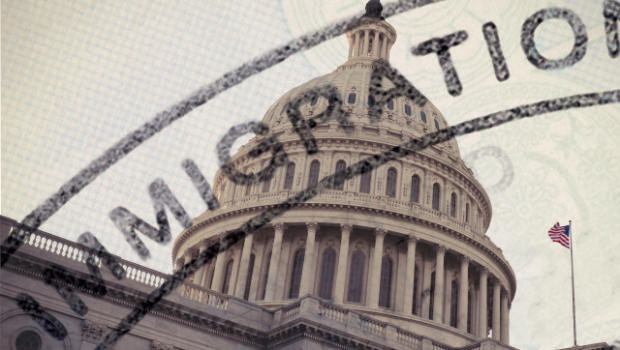 In this post, I want to discuss one more response I sometimes hear Christians articulating in the midst of the immigration discussion: “They’re breaking the law. Romans 13 says we are to submit to authorities and they are not submitting. They are illegal. That settles it.”

Often, this is where the debate on this issue begins and ends. How can any dialog happen when “illegal” is the foundation for the discussion? But what if we started the discussion at a different place? What if we took a couple steps back and asked ourselves, How does the Bible inform us in terms of the laws of our land?

What might immigration policy look like if it was rooted in the whole of Scripture, not just Romans 13? What if it was rooted in each person being created in the image of God, and God’s concern for the foreigner, and Jesus’ willingness to extend compassion to outsiders like the Samaritans and others?

I’m not encouraging anyone to not respect the laws of the land but as people of God, we must continually be asking, “Are the current laws fair and just? Do they reflect the heart and compassion of God?” Even the United Government acknowledges that changes need to be made to the current system. The laws are contradictory, very confusing, and at times blatantly unjust. Are we willing to look at these issues through the lens of Scripture rather than having a knee jerk “what about illegal don’t you understand?” response?

I wonder sometimes if the “illegal” argument gets used as a smokescreen to let ourselves off the hook so we don’t have to wrestle with God’s call to love the immigrant. For instance, I’ve heard strong denunciations about offering college scholarships for undocumented children. How dare we give scholarship money to an illegal immigrant?

But let’s set the rhetoric aside for a moment and think about a specific student—Sylvia, who has lived in the US most of her life, graduated with honors, has many gifts and abilities to offer our society. But she can’t attend college because she will then be deported to a country she has never known. And she can’t get a job because she is not a citizen. So what is she to do?

I know some will say, “Send her back where she belongs,” but what does God’s word say about how to respond to her? It’s interesting how we as Christians often quote Romans 13 about submitting to authority, but just a few verses later, we read these words: “The commandments, ‘Do not commit adultery,’ ‘Do not murder,’ ‘Do not steal’, ‘Do not covet’, and whatever other commandments there may be, are summed up in this one rule: ‘Love your neighbor as yourself.’ Love does no harm to its neighbor. Therefore love is the fulfillment of the law.”

Every commandment, every law, can be summed up in this one rule: Love. Now if someone is unsafe for a society, if someone robs a bank or commits violence, the loving thing is to dispense justice. That’s what our law enforcement is supposed to do. And a lot of people feel that undocumented immigrants are unsafe for our society. But is that a fair generalization?

What about the other side? Do we ever think about all that they contribute to our society? Many are working jobs most of us wouldn’t be willing to do for wages we certainly wouldn’t be willing to work for. They pick crops, they clean hotel rooms, they wash dishes…and they pay taxes, sales tax, Social security tax, even though they will never be able to collect any benefits. A New York Times article stated that undocumented immigrants contribute 7 billion dollars a year to Social Security.

I believe that as followers of Jesus, we should be leading the way with love. Part of that love means supporting attempts for immigration reform, so that the laws regarding immigration are fair and just.

I’ve resisted getting political to this point. But let me express my disappointment that some conservative politicians are now backing away from any support for immigration reform. What disappoints me more is that many of the constituents urging them to not support reform are Christians.

Wouldn’t it be cool if we as Christians were leading the way in terms of speaking up for the immigrants in our midst, making sure that our laws were fair and just, and that these people were being treated with dignity and honor?

As Christ followers our approach to this issue must be foundationally rooted in God’s heart, as expressed in the Bible. May that be what informs our attitudes and behaviors more than anything else.

Older
Immigration Part 3: What Would We Do?
Newer
How To Be A Friend of God