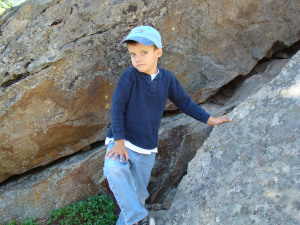 This is my 7 year old son Joshua who started 2nd grade today. I took this picture on a “Father’s Day” hike my 3 boys and me enjoyed. A number of folks regularly ask me about how Joshua is doing so I thought I post an update.

For those who don’t know, Joshua is an incredibly affectionate, ‘never-met-a-stranger’ boy who has been unable to communicate verbally. There has been no official diagnosis other than his placement on the autism spectrum. While Joshua understands a great deal of what is spoken to him, he struggles to put sounds together to form words–but he is trying. This summer he had speech therapy and made some strides in getting sounds closer together. His main form of communication at this point is sign language. He knows several words and has made up several others. He also uses the drag and pull method when he sees anyone available to join him on PlayStation.

We continue to pray for Joshua’s healing but also rest in God’s Sovereign plan. We are continually amazed at the number of people Joshua’s life has touched. His hugs have warmed the heart of many in our church family and community. As someone who bases my ministry on my communication ability, I find that Joshua is a refreshing reminder to me that ministry is not as much about skills but about the heart.

If God lays Joshua on your heart, we would so appreciate your prayers for him. Each day brings with it lots of “Joshua joys” but also lots of reminders of how far behind he is and lots of questions about his future.  So we pray and we trust and we love him.

This weekend, I mentioned in my message some fascinating research done by Dr. John Gottman on the subject of marriage. In his years of studying hundreds of marriages, he has gained some really helpful insights. Gottman states that he can observe a married couple interacting for a few minutes and determine with 91% accuracy whether that marriage will last.

How can he be so accurate? In his research, he discovered four particular types of negative interaction between husband and wife that consistently surfaced. These are so lethal that he refers to them as the “Four Horseman of the Apocalypse”.

What are these four indicators? The first is Criticism. Gottman points out that criticism is different than complaining. A complaint specifically addresses a particular behavior. A criticism on the other hand  is more global and carries with it the message, “What’s wrong with you, you idiot?”

Having criticism in our marriage doesn’t signal inevitable divorce but it does open the door for the second indicator: Contempt. Contempt is fueled by long-simmering negative thoughts about your spouse. Common symptoms of  include sarcasm, cynicism, eye-rolling, name calling, mockery and hostile humor. Gottman points out that contempt is poisonous to a marriage because it conveys disgust. There is little hope for reconciliation when one spouse feels disgust toward or from the other.

The third indicator is Defensiveness. When receiving criticism and contempt, it is natural to feel defensive. But, as Gottman points out, that defensiveness rarely has the desired effect because it is simply a way of putting blame on your spouse, which only escalates the conflict.

The fourth indicator is Stonewalling.  No eye contact, no engagement in the conversation. The person just shuts down. It is a defense mechanism that ends all dialog. Conflicts end up being driven deep and remain unresolved. All four of these “horsemen” play off each other to create a marriage that, over time, can become impervious to genuine reconciliation.

So what are we to do with this information? For one thing, we obviously need to diligently guard our relationships from any of these creeping in to wreak havoc. Secondly, if we realize that some of these things are recurring patterns, we need to get help. There are several marriage resources at Christ Community that might be a helpful next step for you in your marriage. Call Deanne Helmboldt at church if you think a next step like this is needed.

One of things I’ve noticed over the years is the tendency to not get help until things are almost beyond repair. If we wait too long to fix a leaking roof, the damage will increase. If we wait too long to repair a cracked tooth, the pain only intensifies. The same thing is true in our marriages. If help is needed, sooner is better. Don’t be embarrassed. We all need some help in our marriages at various times in our lives.

Les Miserables and What About Bob?

My family was on vacation last week. On Friday, Raylene and I attended an excellent theatre production of Les Miserables. Then Saturday my family watched one of our favorite movies, What About Bob? I doubt if they’ve been compared before but I couldn’t help but notice the similarities. Both are ultimately about the life-giving power of grace in our lives and the destructive power of law.

In Les Mis, Jean Valjean  is a thief who experiences undeserved favor at the hands of a priest, from whom he had stolen some items. It changes his life completely. He makes a new start and ends up impacting many others throughout his life. His ‘enemy’ is a policeman named Javier who pursues him throughout his life. Javert is absolutely committed to upholding the law. He experiences grace from Valjean but cannot handle it. He kills himself.

In What About Bob?, Bill Murray plays a fear ridden person who seeks help from a psychiatrist, played by Richard Dreyfuss. At the start of the movie, Dreyfuss appears to have it all together. He has an effective practice and a new book that is just published while Murray is a total nut case. But as the movie progresses, we begin to realize that the truly unhealthy one is Dreyfuss. He is proud, self-absorbed, and controlling. Murray on the other hand is completely authentic about his fears and begins to build deep relationships with Dreyfuss’ family; the very thing Dreyfuss longs for but can’t seem to make happen. Like Javert in Les Mis, Dreyfuss is ultimately committed to law: being in control, looking good. It doesn’t work. He misses the life he longs to experience.

I love “What About Bob?” but must admit that every time I watch it, I see some of myself in the psychiatrist. Controlling, self-absorbed, distant from those I love. I long for the authenticity of Bill Murray—an open hearted way of living that deepens my relationships. I can’t make it happen. Only God’s grace can do that in me as it deepens its influence upon me.

A number of friends have asked about how the book writing is coming. I actually just turned in the final, final, final manuscript this past week. There have been various edits, revisions, tweaks, etc but this one was really it. No more revisions. It is headed to the printer–which made me a little nervous. It seemed that every time I would read it over again, I’d find more typos that I hadn’t seen before.

Confession: all my perfectionistic tendencies came full throttle to the surface in the writing of this book. Isn’t it amazing how our flesh can be so powerfully active even when writing a book on the freedom and joy of the gospel? Ugh…it has been a reminder again of how desperately I need the gospel every moment of every day.

The highlight for my flesh (and low point for me) came during the process of nailing down a title for the book. For several months, I had been under the impression that the title for the book was set. Then in March I received from the publisher the final mock up of the cover and discovered they had changed the title on me. I didn’t like the change at all.

This threw me into a very unspiritual week or two of panic. Even though I was writing a book urging us to not be about “Trying Harder”, this was suddenly my default response when my “baby” was being tweaked. I started trying harder by getting everyone’s opinions about the title, including the entire church family during worship one weekend. I actually took an impromptu raw poll in the service so that I would have lots of data to present to my publisher.

I now realize, through the gentle work of God’s Spirit,  how my response of panic was deeply rooted in unbelief and idolatry. This book had become too important to me. The title (and image) of this book had become my god. Looking back, I think I was being put to the test by God and ended up failing miserably. It was a hard lesson to learn but an important one. Idols come in all shapes and sizes. Repentance is something we continually need to do as God reveals what we are ultimately trusting in.

I now see that writing a book for Christians who are trying harder doesn’t exlude this Christian from needing its message every day. Just because I’ve authored a book on the subject doesn’t mean I’ve outgrown this tendency. God’s grace is meeting me in this whole writing process and I welcome the fresh breezes of His mercy.

I’m sitting in my office reflecting a bit. Eighteen years ago tomorrow (July 23rd), I began my ministry here at Christ Community. (Can I really be that old?) I was 27 years old and didn’t have a clue what I was doing (not much has changed, hmm?).  All I knew for sure was…

1) I was extremely thankful to have a job—First Evangelical Free Church (as it was called back then) was the only church even remotely interested in hiring me.

2) Raylene and I were coming to serve a congregation of dear folks who had extended so much love to us and who had been praying for God to do something new in their church.

3) I was so hungry for God to move in me and in this little church.

While this church is significantly different than when we got here 18 years ago and my family is 4 children larger, some things have not changed. I’m still extremely thankful to have a job!–especially at this church. There are lots of wonderful people here who express their love for my family in so many ways. And I am still hungry for God to continue to move powerfully in our midst.

Thank you, God, for bringing us here!